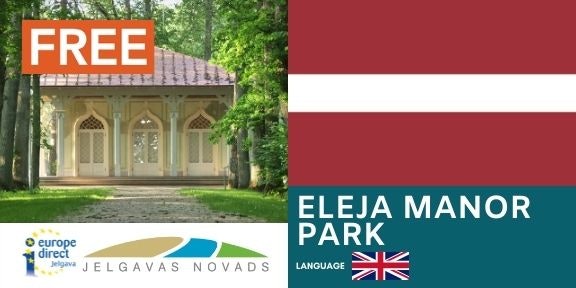 The Eleja Manor ensemble, one of the most important cultural-historical items in the Jelgava Local Municipality, and in its time, a jewel of Kurzeme Classicism, is an outstanding example of building skill in Europe. It is surrounded by a broad park and located 30 km from Jelgava, near the Lithuanian border.

The Manor House was commissioned and built from 1808 – 1810 in a representative Classicist style by Count Christof Johann Friedrich von Medem, who was a well-educated person with a deep interest in art and culture. The Manor ensemble’s parade section was created in a symmetrical fashion. At its centre, there is an oval-shaped parade courtyard with a theatre building on one side and the manor manager’s residence on the other side, which also served as a cavalier building. The courtyard concludes with the Manor House.

The Eleja Manor Park is also recognized as an environmental jewel from a dendrological and biologically diverse aspect, and worthy of Latvian and European level protection.

The Manor House and the majority of the buildings in the ensemble were burned down in 1915 during World War I, almost 100 years after their construction. Only some fragments of the walls have remained of the majestic Manor House. One hundred years later, in 2015, the tea house and the arched stone wall experienced a rebirth.